My weighing scale pointed around 245 lbs (approx. 111 kg) on June 23rd. 2012. It was clear, that this was too much. I gained more than 67 lbs (approx. 30 kg) over the last ten years. I started the ambitious job immediately. No more Coke (I drank more than 2.5 liters a day), no sweets and no more fast-food. My goal was to slim down around 45 lbs (approx. 20 kg) over the next two years and to have the ability to run a minimum of 5k apiece. My first training lessons started with 12 minutes spinning and I increased it up to 20 minutes by August and 20 – 40 minutes by September 2012. I also did some extended walks (more than 20 minutes) in September. A serious illness threw me back and I stopped exercising. I resumed training by end of September and lost some lbs but a great impact followed on October 23rd.. I had a triple fracture in my right upper ankle joint and I had to undergo three surgeries (I got two implants/plates and 12 screws to fix the bones) in the course of the following two weeks. The doctors told me, I would never have the ability to make sports with this broken bone again. On November 10th I left the hospital but I was bedridden for the next four months. In the mid of February I started the first small steps with crutches and over the next few weeks I learned to walk again like a baby. Many times I stumbled and fell down but I always stood up again, it was a tough experience. My first two steps without crutches I made on March 15th 2013. I increased the daily training units significantly and by mid of May I worked out between three and four hours on a spinning bike. My average weight was around 183 lbs (approx 83 kg) and I started to regain my leg brawn. After an intensive training I completed my first 5k walking competition on June 1st 2013 in less than 43 minutes. I participated in a few other walking competitions within the next few weeks and months and I extended the distance up to 10 and 15 kilometers. On September 21st I started slowly jogging at a 10k running competition in New York (USA) followed by another 10k in Inverness / Scotland at the end of September. I finished the Inverness 10k in around 69 minutes. After some more hard training lessons I went to Miami / Florida for a 10k in the beginning of December. On December 8th I successfully finished my first Half Marathon in 02:31 hours.

Conclusion:
You can achieve everything, if you really want!

Special thanks to my parents and friends, they supported me all time and gave me the power to catch this result 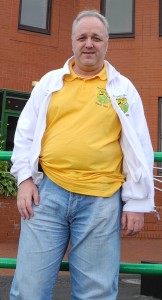